Ageing of the human body is a natural process. By the laws of nature, it can never be completely stopped or reversed. On the other hand, premature ageing can be controlled. Stress, climate, lifestyle choices, undetected maladies etc. can all speed up the process of ageing. It is in this context that Kutipraveshika, a therapy of rejuvenation, healing, and regeneration of living tissue in the body, becomes relevant. Kutipraveshika was thought to be the elixir of old times and references from our bygone past indicates that this procedure helped people defy age.

There are eight branches (Ashtangas) in Ayurveda. They are Kaya Chikitsa (General Medicine), Bala Chikitsa (Pediatrics), Graha Chikitsa (Occult and Tantric Medicine), Urdhwanga Chikitsa (ENT), Salya Chikitsa (Surgery), Damshtra Chikitsa (Toxicology), Jara Chikitsa (Geriatrics) and Vrisha Chikitsa (Aphrodisiacs). Jara Chikitsa itself is divided into two modes of treatment - vathathapi and kuti. In vathathapi, the medicine is given to the patient in the lively ambience of air (vatham) and light (atham). In stark contrast, in kuti treatment, the rasayana has to be taken in complete isolation with a limited flow of air and sunlight for a specific period of time. This unique and rigorous Ayurvedic therapy is called kutipraveshika. Forgotten for a long period of time, the concept of kutipraveshika has been revived single-handedly by Dr. Sethumadhavan and is being practiced in its most authentic form at pahrc.

In Kutipraveshika, the patient is completely isolated from the outside world and all sensory points in the body are given complete rest. Senses such as sight, hearing, taste, smell, and touch are given a break from their routine activities. The minimum duration for kutipraveshika is 45 days and it can go on for many months. Before entering the isolation period, the patient has to undergo a cleansing process. The isolation period is spent in specially constructed structure called kuti where all aspects required to control the senses are incorporated. During the stay within the kuti, patient is only served a special diet of gooseberries, milk and ghee (clarified butter made from the milk of a buffalo or cow, used in Indian cooking). The results of kutipraveshika will be evident on the day the patient steps out of the kuti. The veneer of age is brushed off, dead skin and years of damage is cleared off and overall the body weight is reduced.

Kutipraveshika is akin to entering the womb and undergoing a process of rebirth. Naturally, the process is long and arduous and requires serious commitment. Before undertaking this strenuous procedure, the patient must prepare himself/herself for the days to come. The patient must slowly reduce the frequency of interaction with the external world - be it the usage of mobile phones, laptops, social media and even the actual act of meeting people or going out. When this is practiced gradually, beforehand, the transition to the kuti lifestyle becomes easier. A panchakarma therapy is obligatory to detox the body completely and also purify and prepare the mind for the Kutipraveshika. Not everyone is suited to undergo this unique therapy and sometimes the timing may not be right. Therefore, a comprehensive and in-depth consultation with Dr. Sethumadhavan is critical for the success of this highly effective regeneration therapy.

An exquisite architectural marvel, the kuti is constructed of brick walls and tiled roofs in such a way that the temperature inside remains constant. The entire kuti is divided into 3 concentric square spaces - a reason why it also called the trigarbha kuti. The penetration of light inside the kuti is precisely controlled. The innermost sanctum remains pitch dark to provide complete vision inhibition. External noises are reduced thanks to the concentric wall formation, which acts as a soundproof barrier for the patient. Smell is also blocked off as the structure is situated at a place where there can be no external smell which is strong enough to disrupt the procedure. The kuti, a thoughtfully recreated structure, is the result of extensive research and extreme precision. 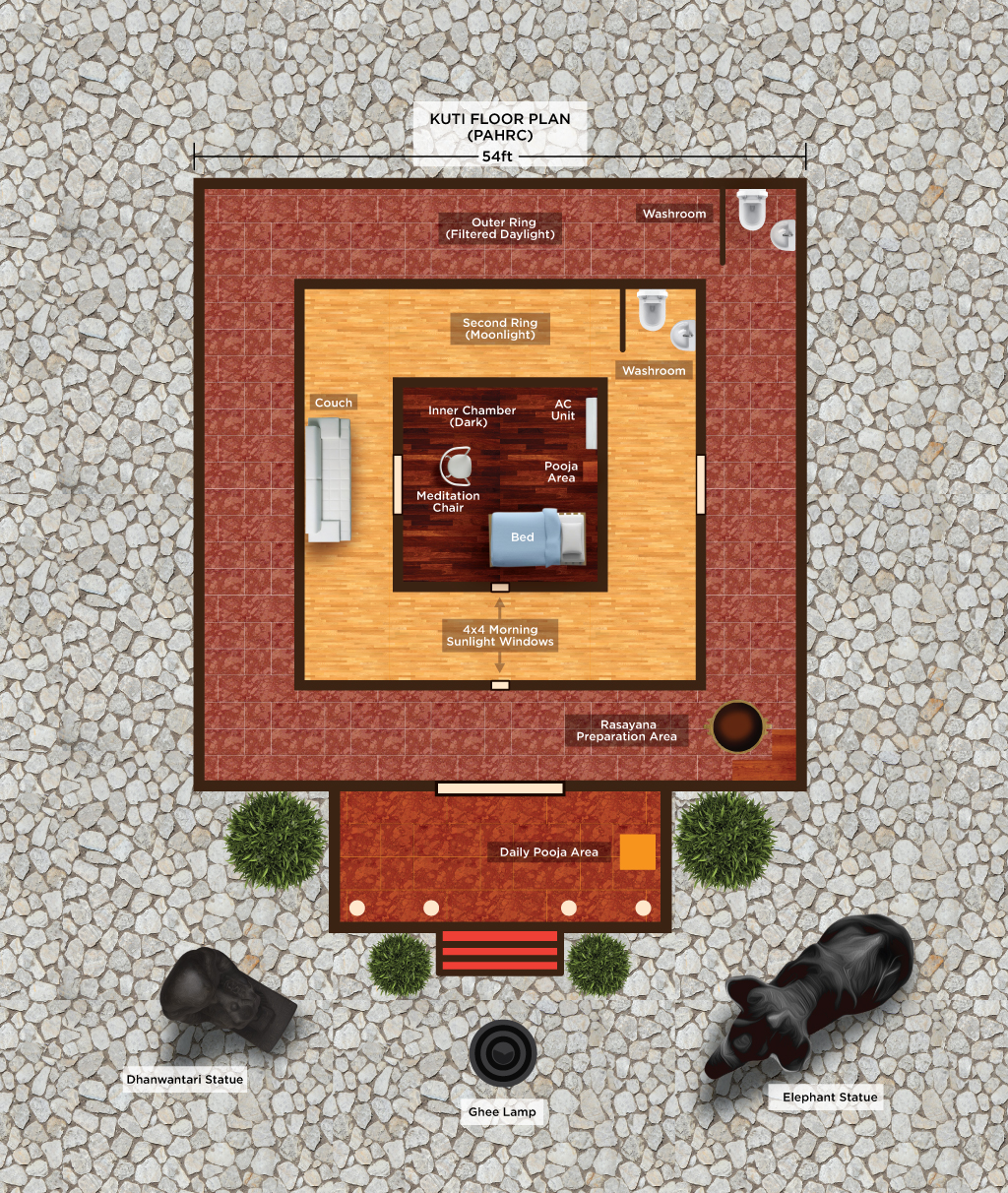 Once the patient enters the innermost sanctum of the kuti, the only form of human contact will be when the meals are served. The rasayana - a mixture of amalakki (gooseberry) paste and milk from the medicated cow - is the only food the patient can consume over the course of the kutipraveshika. The physician can customise the dosage and formulation of the rasayana depending on the patient's constitution and requirements. Over time, the patient's body and mind slowly adjusts to this isolation and diet. To stay focused, the patient can meditate, chant mantras or prayers or do some light walking as exercise. An oil lamp can be used as a minimal source of light.

The benefits of kutipraveshika are in fact plenty and vary from person to person. The differences dependent on the number of days spent in the kuti. Visible changes include: